I totally didn't plan on being gone for quite this long. A week or two at the very most, but a month!! Where the heck did November go?! And how are we already only 11 days away from Christmas?! I'm so far behind on my Christmas sewing!

But i do have another finish for my FAL list. 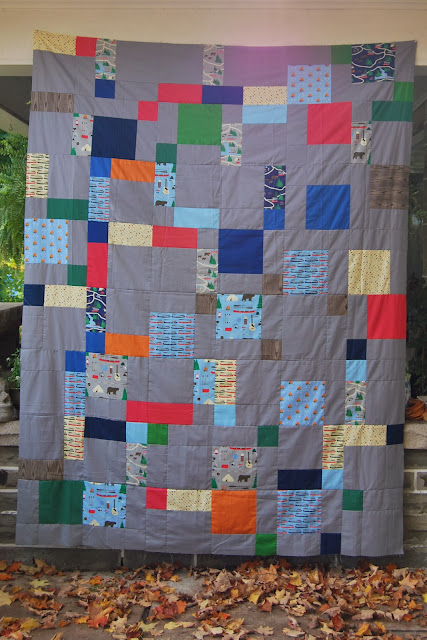 Well it's long been finished and sent to it's new home. Unfortunately my full shots were blurry. Take a look. 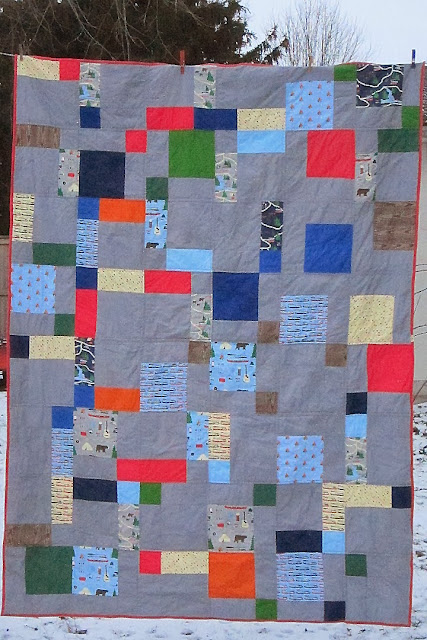 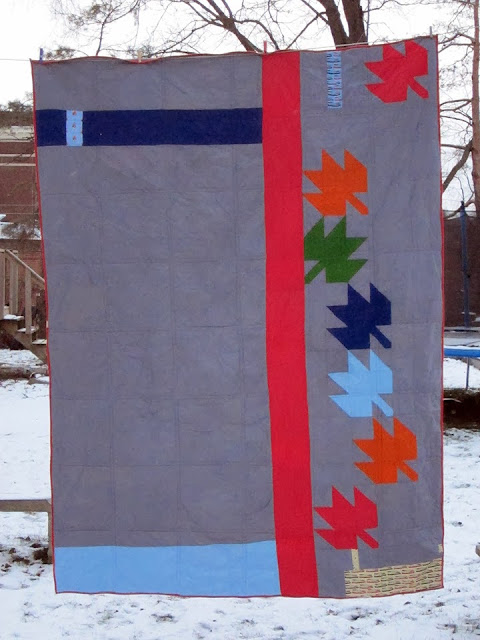 Eek. Not so great. And i have to say, there's a reason why i keep my quilt backs simple. Pieced backs are not my strong suit. I just can't do it. I probably should have stopped with just the maples, and left the rest grey. But in an effort to use what i had, i frankenbacked it and stitched up all the little bits i had left over.

Hmmph.
Let's just leave it at that, shall we. 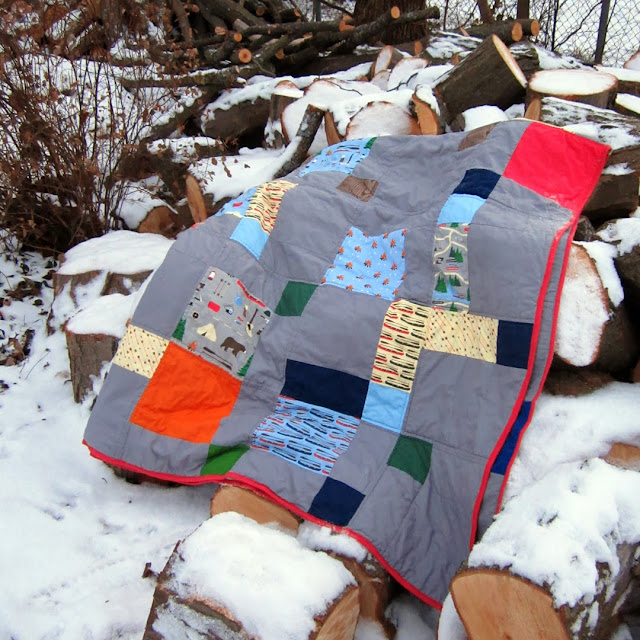 Super simple quilting on this one. A quarter inch outside each seam, done and done. 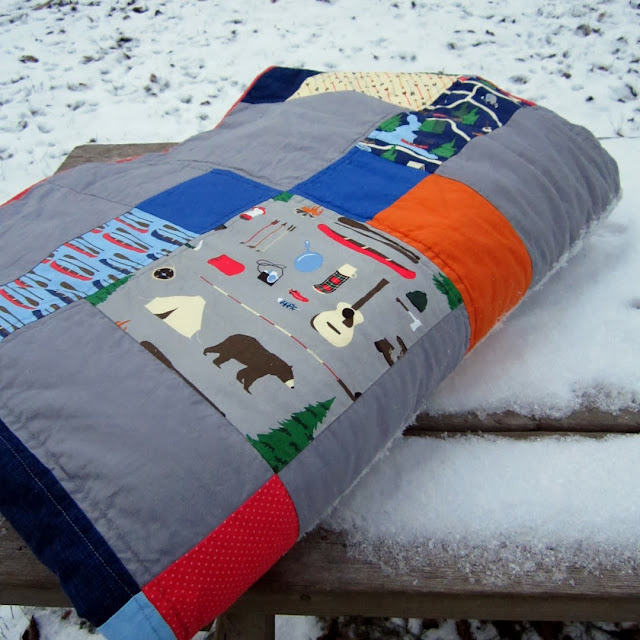 This one finished up at 71x94 and after quilting it i swore i would never tackle anything else this size again. The actual "quilting" part of quilting isn't my fave. I'm definitely more of a planner, like you all hadn't already known that, what with all my half started projects! So having to maneuver this through the throat of little old Ken meant keeping it simple. I like how it turned out, enough quilting to keep it together, and at the same time it feels kinda campy, retro. Maybe that's just me.

So then with thoughts of finishing up some Christmas gifts i sold a quilt in my shop... to someone that wasn't my sister! And she wanted it personalized. So this is what i came up with. 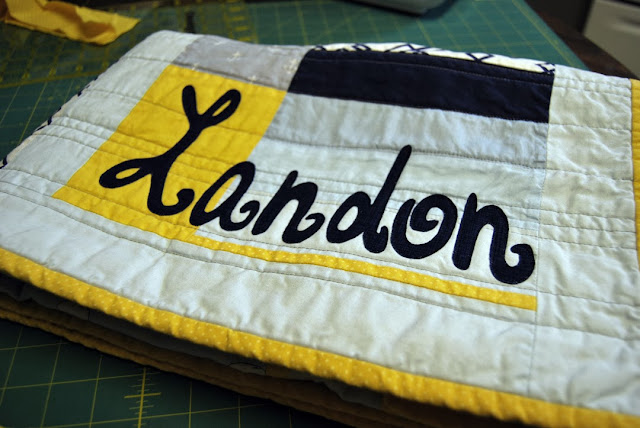 She picked the font and i appliqued it on using Heat and Bond Ultra, then sketch stitched around the edges. 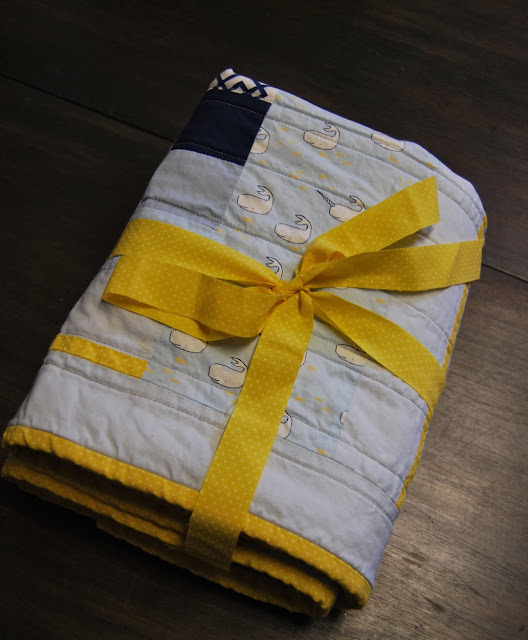 I love this quilt and part of me hoped that no one would ever buy so i could keep it... probably not the best way to run a business though!

So finally with that project taken care of, back to the Christmas gifts! Nope... wait... another order through my shop! Really people, a month before Christmas! Not that i'm complaining.

So this one was for a quilt similar to the Constellations quilt i have listed in my shop, only in a queen size. Gulp. I'm pretty sure i swore off HST's the last time i made one. Though i think i say that every time i have to square up HST's.

This one went together surprisingly quick. 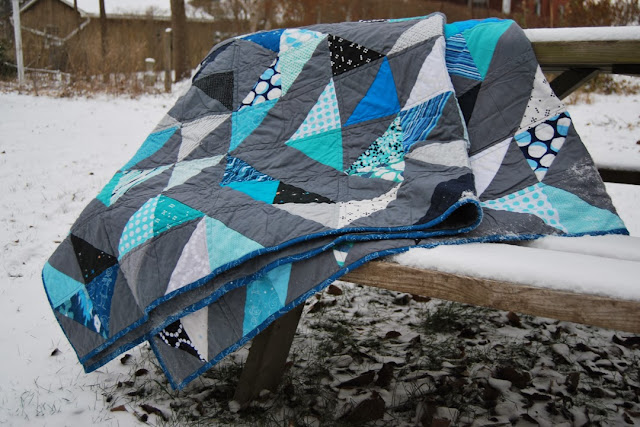 357 hst's, most of which were squared up on my lap with my trusty Omnigrid cutting/pressing fold away dealie, while getting caught up on The Walking Dead.
I also went about this one in a way entirely new to me. I would normally square up everybody and start sticking them up on my design wall, you know, to get that perfectly random placement. Then stitch them all together in rows.
This time i broke the whole quilt top into 16 segments, figured out how many hst's i needed for each section, then divided all the hst's equally by value into each section. I found by doing it this way i was free to square up a smaller amount of hst's at a time, as well as being able to sew them together into blocks that i could later attach all together. It felt like it went by a lot quicker than normal, i think maybe because i was seeing the progress at the final stages while i was still squaring up. Did any of that make sense? Feel free to ask any questions if it didn't! 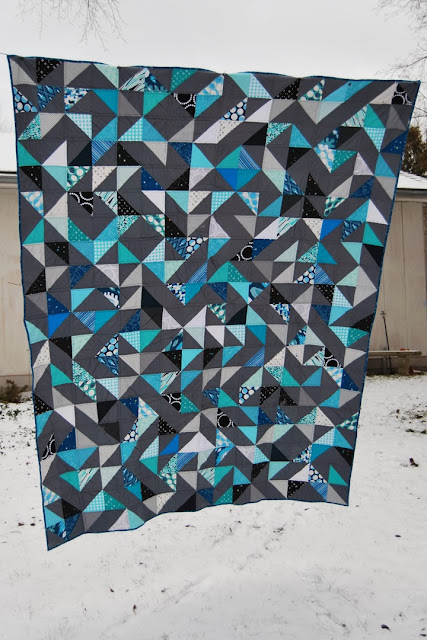 I must say, i love this one, possibly more that the first one i made using these fabrics. I've added in a lot of prints i didn't have the first time around and used Kona Steel for the grey instead of Iron. Violet Craft's Waterfront Park played a big part in this one. Both the black and white domino dot prints as well as the lagoon domino dot print and reflection and shattered prints in luna all were essential to bulking up my slowly dwindling collection of Constellations. 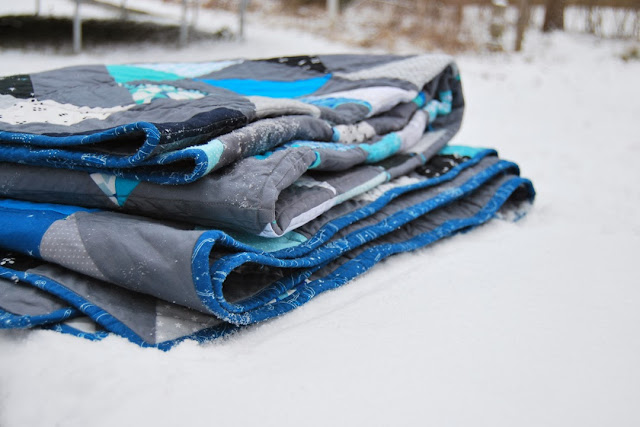 I used the Constellation print in teal for the binding. I love this print for binding! Just the perfect amount of interest without being too busy!

And the quilting, after finishing up the Take a Hike D9P i swore off big quilts, but much to my delight, my machine handled like a dream. Well, maybe i won't go that far. But i had originally planned on just horizontal quilting, so i started with my standard quarter inch out on both sides of every horizontal seam, with plans to go back and fill in a bit here and there. But after getting that far i thought i'd give it a try on the verticals. I normally don't do this, i always seem to have issues where my quilting intersects. Little puckers getting folded over and looking terrible. This time though, no problems! I skipped every other seam while doing the verticals and ended up with a lovely bunch of rectangles on the back. 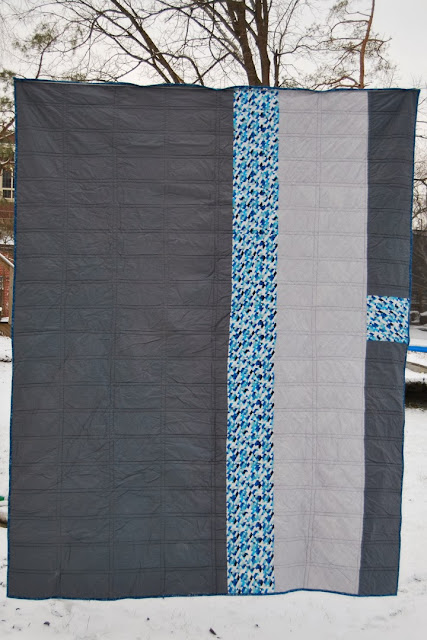 Love!! And this back, definitely me! Simple, and yet interesting. The lady that commissioned this had said that she loved that back on the other Constellations quilt and wanted to know if i could do something similar. So i used up that last bits of the Kona Steel and added in the Supernova print and a slice of Carolyn Friedlander's Widescreen Crosshatch in grey. You have no idea how excited i was when my LQS got the Widescreens in! So perfect for backings. And not just as a whole backing, that little strip isn't pieced and i only needed a half metre! I have great plans for these Widescreens :) 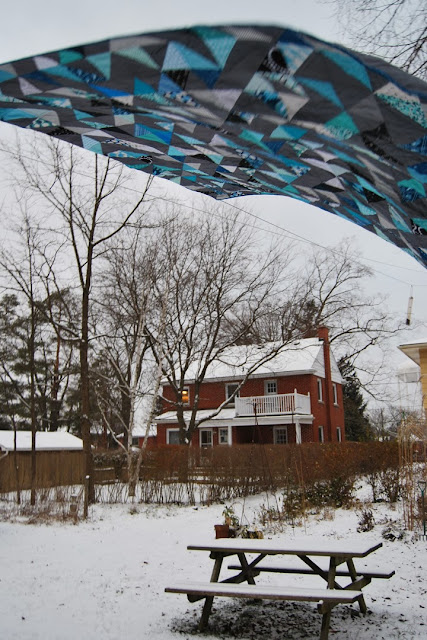 I did have such great photo plans for this one, plans that involved an ice incrusted river and a pier. But the wind and freezing temps, along with a bout of the the plague and a wicked cold, put a damper on that. So the clothes line it is!

This one finished up at 78x98 and if i had of been making it for my shop, it would have never made it there. I love it that much!

I have so many other things on the go that i want to share but i can't and it's killing me!
No progress to report on my Penny Sampler, and it's killing me not working on it, same goes for Max's Penny Patch. On hold until the Christmas gifts are made, so number one priority right now, 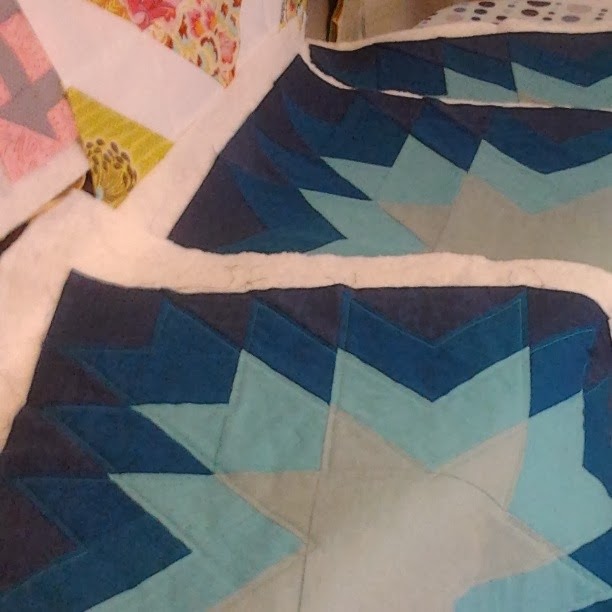 Finishing the six remaining stars for this quilt, and perhaps thinking that i should have asked Santa for a new cell phone with a better camera, sorry for that craptacular pic!
Along with a bajillion other sewing projects. Then i can finally start in on the AMH bedroom makeover!
My mom was kind enough to pick up most of the entire line of Dowry for me for Christmas along with yardage of a couple of my favorite prints to make pillow cases out of. And some of her gorgeous velveteen from her Field Study line to make pillow shams with! I'm so excited!
My mom also let me take a quick pic before taking it all away for Christmas, 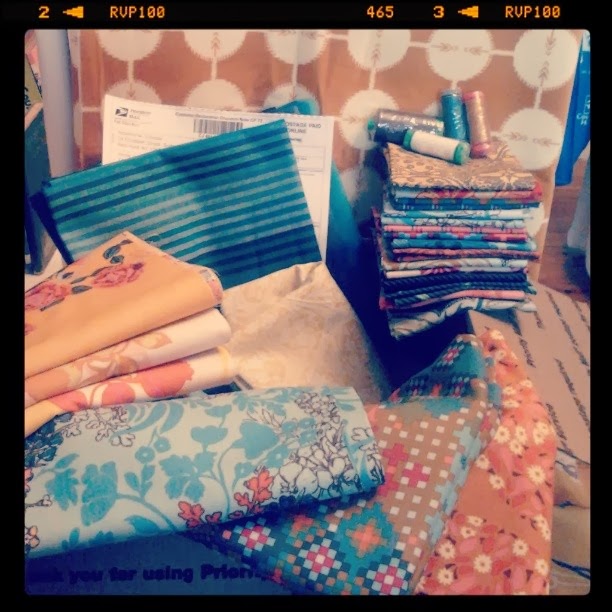 And with that, i wish you all a wonderful weekend! We're heading out on Saturday to get our tree and i've finally had a bit of time to get some of the decorations up! How about you, wishing for more time before the big day?!

High fives for two quilt finishes, beating the plague, and selling some of my stuff to someone that isn't my sister! (again Al, not that i don't appreciate your sales!!)
xo snips

I love comments!
And will usually respond by email, unless you're a no reply blogger. Then pop back here for a response! 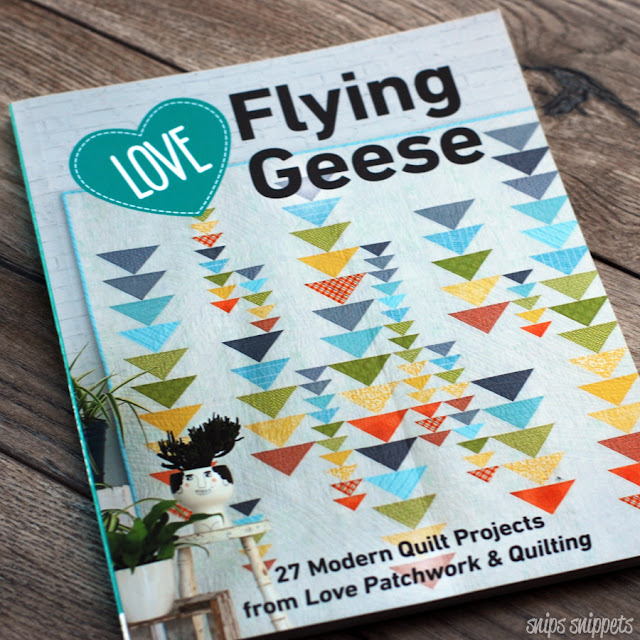 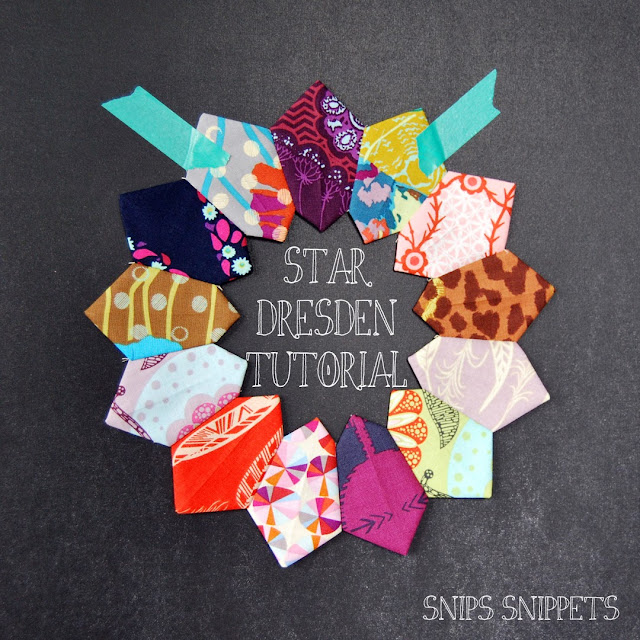 nicole
High fives for everyone! Thanks so much for stopping by! I'm Nicole. Full time quilt designer, occasional painter and all the time little boy wrangler. This is just a small place for me to share with you, some snippets of my life :)